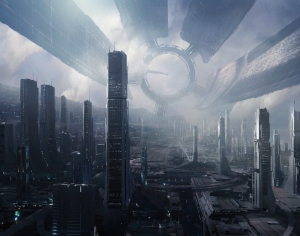 Slowly, Tasi woke. Light streamed through her visor and into her eyes. She stirred slightly, sitting up enough to look around. It was safe to say she was in the ships Medical Bay. She lay on an indented slap as a large ring slid up and down the bed, spinning as it took different scans and readings. As it finished, the ring slid back into its dormant state past the head of the bed.

Tasi threw her legs over the side. She shook her head to clear it. When she opened her eyes, she activated her omni-tool and conducted a personal medical scan. The readings fed back to her visor. Other than a slight fever, her condition was good. Anti-biotics and immune-boosters swarmed through her system. She got to her feet and headed out of the Med Bay.

Directly across was the Technology Research Lab. Several technological devices sat idle. She heard talking, more like arguing, to her left towards the bow of the ship. As she walked towards it the doors opened revealing the bridge.

Streaks of blue streamed across the windows of the deck, bathing the bridge in a flickering blue light. The mech sat quietly at one of the stations, typing away at the keyboard. The Asari sat in a chair on a raised platform overlooking the rest of the bridge. She sat with her legs propped up on one of the consoles present. Tasi was able to take a better look at the Asari. Her skin was a bluish tint of purple. She wore a white crop top blazer over a black skintight jumpsuit with slits that revealed a lot of skin. The Asari rolled her eyes in boredom as a vorcha shouted at her.

“And just who’d’ya think you are, bossin’ me ‘round!” the Vorcha yelled, “And on my ship! Some gratitude, pickin’ up yer sorry asses off that god’fer’saken rock.”

The Asari shot up from her seat, her whole being glowed blue with the power of biotics. Quickly, the mech turned and drew her weapon which was now aimed at the Asari. The vorcha crossed his arms confidently. He looked different from most of the vorcha Tasi had seen. Most of the time they were seen as pests, hideous creatures with unmatched adaptable DNA. His skin was rough and leathery. Tattoos and scars decorated his exposed arms. More impressively, he spoke much more clearly than his vorcha brethren with only slightly better grammar too. It could be in part because of the smaller rows of teeth he had in comparison to other vorcha.

Tasi heard the doors open behind her. Soon after the turian from earlier ran passed, arms extended to distil the situation, “Hey, there! Let’s all calm down here. We’ve all been under a lot of stress recently, but it wouldn’t do anyone any good if we blow out a bulkhead.”

Silence hung in the air for several moments. The Asari sat down, “Fine. Looks like our sickly quarian is up and walking about.”

The vorcha threw his hands in the air and shook his head, “Great, the other freeloader.” He walked toward the bow and down a short set of steps to the front pilot seat. The mech sat down her gun and returned to its work.

Tasi stared at the asari, “You’re Aria T’Loak, the Pirate Queen of Omega.”

Aria barely looked at her. She smirked, “A bit dramatic, don’t you think?”

“Pirate Queen?” the vorcha laughed, “Coward, more like, seein’ ‘ow fast she ran when Cerberus came knockin’. Since then, she’s been all bark ‘n no bite. Shoutin’ like an idiot but doin’ nothin’ worth somethin’.”

Aria slammed her fist on the console beside her, “I AM Omega. Cerberus won’t be able to settle in for long. I will take back what is mine.” With that, she fell silent. The vorcha let out a dissatisfied grunt.

The turian turned to Tasi, “You feeling better? AVI said that the fight caused a lot of micro ruptures to your enviro-suit. Since you quarians have weak immune systems, and also possible partly due to the physical exertion, it really took its toll on you.”

The turian motioned to the mech. The mech was a combination of cold white metal and vibrant purple synthetic muscle tissue, with a light and sturdy frame. It was humanoid in appearance with a glowing orb imbedded in its chest.

“She’s the one who brought you up to Medical and patched you up. Oh,” the Turian offered her hand, “Name’s Vicia. Told you I’d get us off that station. The grumpy old vorcha is Kritt. He’s the pilot and apparently the owner of the ship. Her name’s the Thunderbird. I don’t think that I ever got your name.”

Tasi looked at Vicia a moment before taking her hand, “Tasi’Vanya nar Nedas.”

Vicia smiled, “Well, glad to see you on your feet Tasi.”

Tasi looked out toward the bow, watching the lights stream along the ship, “We’re in mass transit? Where are we headed?”

“Well, yer about to find out,” Kritt called from the pilot’s seat, “Knees up! We’re ‘bout to drop out of the network.”

The ship drastically decelerated. The flickering blue light changed to a smoky purple appearance. Through the vast amounts of space dust was a bright glow of a nearby sun. They passed through a dust tendril and to the other side. In the distance, a massive station rotated slowly in the midst of the dust cloud.

The Citadel was the heart of the Galactic Community. It consisted of a massive ring, called the Presidium, with five arms. The Presidium contained the branches of galactic government including several embassies. It was mostly where the rich and powerful lived and worked. The Presidium was also the location of the Ciradel Tower, a structure cutting into the center of the circle. It housed the Council and Citadel Control, the main air traffic control for the station.

The five arms were called Wards and held the more residential and commercial sectors of the Citadel. As the ship sailed toward the Presidium, Tasi noticed several skyscrapers towering off the superstructure and sealed off against the cold of space. The breathable atmosphere on the Wards was only maintained at a height of 7 meters.

“The Citadel?” Tasi asked, “What are we doing here?”

Kritt spoke over his shoulder, “You should ask her Majesty over there. She practically insisted.”

Aria sat stoically, barely noticing anyone else in the room.

“We are being hailed,” AVI reported.

“Must be Control,” Vicia walked around the center podium. She nodded to AVI, “Patch them through.”

“Thunderbird, this is Citadel Control,” the officer said, “State your business.”

Vicia looked cautiously to the side before she spoke up, “Buying more supplies for sale in the colonies. Requesting docking privileges.”

“Send the appropriate information: Merchant license, list of current crew and cargo, and confirmation of your last port. We will wait for your data transfer.”

Kritt turned around in his chair. He gave Vicia a look that could kill, “What’re you thinin!? Merchant’s license? Unless you got one-a-those hiding in that frill a yours, they’re goin’ to shoot us outta the sky at this rate!”

Kritt muttered to himself as Tasi rushed over to one of the console and started typing feverishly, “Give me a minute, I think I can doctor up some documents stating we passed through a magnetic dust field. It could be a believable excuse to why we don’t have the data.”

“Don’t bother,” Aria said as she activated the console nearest to her. She pressed a few buttons on the holographic interface and swiped upward. Tasi got a glance of the documents before they were sent. They were high quality and very convincing. With little effort, Aria reclined back into her chair, “What were you saying? About me not doing anything?”

Kritt grunted, “Even a broken clock is right twice a day.”

Citadel Control spoke over the comms, “Thunderbird, we’re received your data. Everything looks good. Docking permission granted. Your license allows a 24-hour dock on the Presidium. Any longer and your ship will be impounded. Sending your route.”

“Thank you,” Vicia said before disconnecting comms. She nodded to Kritt, “Take us in.”

Kritt rolled his eyes, “Who died ‘n made you Captain?”

The vorcha flew toward the Presidium ring and docked at their designated bay. He landed on a large platform for smaller vessels. With the landing gear extended, the Thunderbird attached itself magnetically to the platform. The skybridge extended to the ships airlock. As everything settled into place, Aria sat up and stood.

“Finally,” Aria said as she walked toward the airlock, “Come on. I have a job for all of you.” 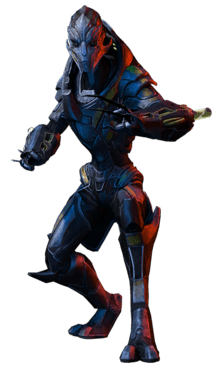 Aria smirked, “Funny, I would have taken you for the drinking type.”

“Well,” Kritt said as he stood from his chair, “as long as you’re buying.”

Tasi brought up the rear. Before the airlock doors close she looked behind her. AVI stood near the entrance with her hands clasped behind her back. The doors closed and Tasi continued after the others.

Tasi walked as she talked, “You mentioned a job. What kind of job?”

Aria smiled, “Like I said, Cerberu’s days on Omega are numbered. And I want to hire you to help me take it back.”