So, the new Batman v Superman came out this week. It has been an amazing time for comic book fans. I have been fortunate to see Batman and Superman duke it out on screen, the Avengers all appear in the same movie, and to see the Merc with the Mouth: Deadpool brought to reality. All I have to do now is stay alive long enough to see Captain America: Civil War (with Spiderman!) and the Suicide Squad.

For those who don’t know, the new movie has been getting a lot of hate from fan for a variety of reasons. The general opinion seems to be to love it or to hate it. I have seen very few people who share the same view as me standing in the center.

Don’t get me wrong! There are a few issues with the movie, by no means is it perfect! For those of you who have not seen the movie, don’t worry, I won’t spoil anything. But it does suffer from trying to be too many things at once. It doesn’t seem to know whether it wants to be a Batman v Superman movie or a Dawn of Justice movie. And while it is still an enjoyable experience, I would be lying if it wasn’t an issue.

However, there are a lot of awesome parts in the movie! Like the Batman v Superman part. Ben Affleck is an amazing Batman/Bruce Wayne. He lived up to my expectations as one of the few people who believed in him to do a great job when announced he was taking on the role. Then there is Gal Gadot as Wonder Woman. I’ll be honest, I loved seeing an awesome woman superhero.

What’s my point? My point is I don’t understand why people feel like they have to choose sides with this movie. Either you have to love it or hate it. Me? It falls under the ‘eh’ category. I’ve noticed this becoming more and more common. The idea that you have to be on a side. Standing in the middle or saying you understand both viewpoints is seen as a cop-out.

You either have to be a Mac or a PC user. Are you on the side of Nature or Nurture? You have to be a Democrat or a Republican. Is that dress gold or blue? And people passionately defend each side with extreme amounts of gusto.

Is it so wrong to want to understand both sides of an argument? Sure I liked the Batman v Superman movie but I also understand why someone might not. Everyone in entitled to their opinion. 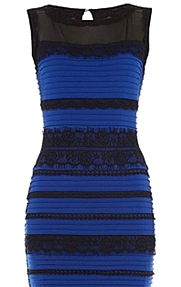 Gold in shadow or Blue in light?

For some reason, the idea of compromising turned into something bad. At least in my experience it is viewed as something weak. The idea that you have to stick to your side no matter what is a dangerous one. If understanding and compromising isn’t done, progress stalls because no one wants to give up their stance. With understanding the others point of view, it makes it easier to find a middle ground satisfying for both sides and be able to move forward.

Everyone has opinions. Some opinions make more sense than others or are easier to understand. But the willingness to hear different sides and viewpoints goes a long way. I shows the people you talk to that their opinion matters even if you don’t agree. Hearing different views only ads to your experience and knowledge. So why not! We have two ears for a reason, right?

I’m going to reduce the Thadus chapters coming out from two to one. I’ll temporarily stop posting chapters on Mondays and post a chapter on Fridays. The reason for this is because school is getting a bit busy. I’ve got tons of writing assignments and reports that are due and also have two oral reports I need to write and prepare. So sorry if you want more chapters but don’t worry, once the workload lifts I’ll post more. Thanks for your understanding.

This entry was posted in Journal and tagged batman, between, both, Journal, place, sides, superman, understand, woman, wonder, worlds. Bookmark the permalink.

2 Responses to Understand Both Sides?