Ral climbed the rungs on the ladder on the starboard side of the ship. Widow leaned down and helped the quarian up onto the deck. She stood and looked up at the sail mask. It towered high above the ship, anchored to on the roof of the entrance way to the lower decks.

The metal frame was in a stylized ‘A’ with a foresail and a rotating mainsail. It slowly swung back and forth in the wind. The creaking sound of metal against metal rang though out the air accompanied by the snapping of fabric. Attached to the mast was the bowsprit. It extended past the forward bow, running parallel to the deck pointing down toward the sand. The entire ship settled, unused to the added weight of its guests.

Ral walked aft toward the stern. The tiller rotated back and forth at the same pace as the mainsail. The rear third of the deck was only protected by a bar of metal railing in contrast of the white wall that surrounded the rest of the ship. A foot of metal between safety from the harsh wilderness and potential attacks.

Nych shook her head as she looked up at the mast, “There is a lot of work to be done.” She turned to Ral. Her eyes narrowed, “Well, don’t just stand there! Get the door open and get to work.”

Ral rolled her eyes under her mask. She walked over to the entrance. Without power, it would have to be opened manually. Ral found a panel and used her tools to detach it. After crossing a few wires the door cracked open. Ral slid her fingers into the space between the floor and the door and pulled the door high over her head. Slapping her hands together with satisfaction she continued down stairs. After quickly doing the same to the door entrance on the first floor she waked into a dark hall.

Using her omni-tool as a flashlight she looked around. Ahead of her was the entrance to the crew quarters. Concluding that the power source wouldn’t be there, she moved on.

She walked down the length of the ship passing a room labeled ‘Tech Lab’ and a bathroom. To her right was the rear of the ship. A strange metal walkway suspended in air leading out to some kind of electronic core. Without the power out, it was impossible to tell what it was for. On either side of the walk way were two elevators. One of them was on the second floor so she jumped down. She undid the hatch and opened the doors from the inside.

The ship creaked ominously as she ventured into the final floor. On either side of here were the cargo holds. She continued passed a kind of living area with a washroom and a couch before passing a medical and research lab. At the end of the hallway was what she was looking for: the engine room.

The doors were cracked opened already and she squeezed her way through. A dull red light flashed sluggishly from a massive engine in the back of the room. Ral approached it to see what she was up against.

Three out of four cylinders stuck out of the front of the engine. Before touching anything, she walked around to the right side. There was a computer panel and screen on its surface. Ral tried accessing it. For a moment things started coming to life. Lights started flickering overhead and machines started up again. An error appeared on the screen: Insufficient Power, Shutting Down. Everything shut off again and she was engulfed in darkness.

“Of course it won’t be that easy,” Ral muttered to herself.

Ranik nodded, “Try the other side.”

To her surprise, the fourth cylinder at the front popped out of its compartment like the others had. Determined to figure out how the ship worked, she walked around to the left side.

The attached structure looked like a small fusion plant. In a compartment in front of it were six more cylinders.

As’sha looked over her shoulder and shrugged, “They kind of look like batteries.”

Ral nodded and gripped hold of the metal handle on one of the cylinders and slowly pulled it out of its compartment. She lurched forward expecting the weight. Slowly, Ral brought the cylinder to the front of the engine and replaced one of the old cylinders. She did the same for the remaining three.

When the task was done she went back to the computer panel side and tried starting it up again. Lights shot on and machinery started humming. Ral smiled at her success.

The ship rumbled. Suddenly, it shook violently. Ral fell to her knees.

Ral looked at the screen. The thrusters were on full blast, the last setting recorded in its memory. Ral launched herself at the keyboard. Her eyes quickly scanned for a solution but all the button were in a language she didn’t understand. She typed quickly, hoping the commands would be the same but nothing happened.

“Stop!” she said in a low voice. Several ceiling panels fell around her. “You’re tearing yourself apart! Stop!”

Text scrolled on the screen. Windows opened and closed on their own. Soon the thrusters shut off and the rumbling stopped.

Ral gave a huge sigh of relief, “Thank the homeworld!”

Ral looked around. She was the only one there.

The quarian ran toward the voice. She took the newly powered elevator to the first floor and stopped. The doctor, Widow and Vicia all stood on the walkway. Their attention all focused on something. Ral looked at what they were looking at and stopped.

The dormant electronic core she had seen earlier was now flashing with life. Beyond a force field like barrier an orange translucent figure hovered over the core. Its appearance was similar to that of a Prothean. There were many similarities to the collectors and the zha’kril. It had four glowing eyes and a sliming figure with an exoskeleton-like appearance.

“Please identify yourself,” it spoke in a calm but commanding voice.

Vicia took a step forward, “I am Vicia Bellanis and this is my crew. We are here to try to bring the ship back to zha’til city. Who are you?”

The hologram raised its head and squared out its shoulders, “I am this ships Combat, Intelligence and Defense Database. The previous captain and crew affectionately called me KIDD.”

“So you know what happened?” Paz asked.

KIDD looked at him, “The ship crashed and the crew was taken or killed.”

KIDD suddenly looked up. It acted like it heard something on the outside, turning its head frequently. The force field between the crew and the AI dropped. It turned its attention to Ral, “We are under attack. The ship must be moved immediately. The intercom system is damaged? Would the head engineer please approach?”

Vicia looked at Ral, “I though you said the collectors wouldn’t notice us!”

“That was before the ship tried to drill into the sand dune,” Ral responded.

Nych ran up to them. She took a short glance at the hologram before looking at Vicia, “There are collectors incoming from the north-east. We need to get out right now. We’ll have to leave the ship.”

“We will,” Vicia nodded. She smiled, “But we are taking the ship with us.” Vicia looked over her shoulder, “Get this ship off the ground!”

Vicia motioned to the others, “Let’s buy her some time.”

As they walked away, Ral looked up at KIDD. An artificial intelligence. Ral shook her head and closed her eyes. She had to do it if they were going to get out of there. Her omni-tool activated and she waved it over the AI core. After she had downloaded the necessary information she went down to the second floor. As she ran a hologram of an orange orb appeared beside her.

“I will need your assistance activating the necessary systems,” KIDD’s voice came from the orb.

Outside, Vicia ran for cover on the port side. The impact of lasers and bullets could be felt around her. Widow rushed in beside her and reached for her sniper rifle. She immediately brought the scope to her eye and fired. The bullet killed a collector on one of their hover bikes. The second collector pushed the dead one to the ground. It slid forward in the seat now in control of its own vehicle.

Vicia looked over the short wall. Six bikes crested a large sand dune and sped their way down followed by one of the slow moving big ones.

“Bout time!” Khal activated his tech armor and pulled out a missile launcher.

Paz looked shocked, “Where did you find that?”

He set a missile loose. It struck beside one of the bikes. The impact and force caused it to tip to one side. Off balance, the passengers fell off and rolled in the sand. Khal laughed manically already loading another missile. Nych seemed to enjoy his attitude and fired several shots with her crossbow.

Consensus deployed its mobile turrets, sending them after the enemy. It attached its assault rifle. The lights on its armor glowed red and it started firing. Flaming bullets poured out of its weapon, igniting the sand where it hit and any organics unfortunate enough to get hit. Paz cowered at shots were fired.

Vicia leaned over and grabbed the salarian, “Take that pistol you have and make yourself useful!”

The doctor nodded and armed himself. He peaked over the wall before taking a few shots. Vicia rolled her eyes. He had missed entirely. She was beginning to think it was unlikely he was ever part of the salarian Special Tasks Group. Vicia stood up, her arm glowing blue. She pulled a bike into the air, flipping its riders.

Doors opened on the large ship. A hoard of collectors flew in their direction. Widow used her rifle and shot down several of them in rapid succession. A few managed to land on the deck. They shot at the hiding crew. Khal let out a war cry and charged at them. He dropped his missile launcher, arming himself with a shotgun instead. One of the collectors shot at him but his tech armor took the hit, reflecting the laser off of him. Khal head butted the collector before firing his gun.

Vicia smiled. She extended the blades in her gauntlets and charged at the enemy. Using her biotics, she decreased the space between them in seconds. She thrusted her blades into a collectors abdomen. It twitched before slumping onto the deck. Another collector to her left aimed at her. It was taken off guard. Urz bit down on its arm. The sheer power of his bite broke the collector’s bones. A gunshot ended the collector’s life. Pazor crouched, his hands shaking and a gun in his hand. 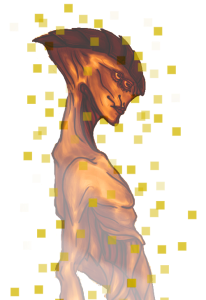 The ship shook from an impact. The enemy ship fired a kind of plasma weapon. It struck the hull of the ship, tilting it to one side.

Nych looked at Vicia, “We need the barriers up if we are going to survive this!”

“She’ll get it done!” Vicia shouted back, “I know she will.”